in Back Pain
Tagged With: Back Pain, Orthopaedic Associates of Central Maryland, Scoliosis, Spine 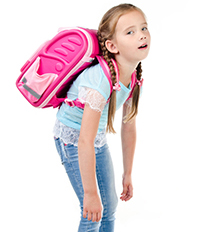 That time of year when your child gets older and enters a new year in school, his or her backpack tends to grow along with their workload. School related items will be weighing them down, with everything from textbooks to sports gear, to cell phones and laptops. However, do overloaded backpacks carry serious health risks, such as scoliosis?

For many years it has been said that heavy backpacks are one of the causes leading to scoliosis developing in children. However, there seems to be limited scientific evidence for this. A 2004 study by Dr. David Siambanes (Journal of Pediatric Orthopedics) looked at 3,500 students aged 11 to 15 in the United States, and determined that 64 percent reported having back pain occasionally. Two of every five children reported feeling pain while wearing their backpacks. Most students with pain said that the pain was recurrent, however, those students carrying heavier backpacks were more likely to report back pain.

According to Orthopedic surgeons from the American Academy of Orthopaedic Surgeons (AAOS) wearing a heavy backpack does not create a risk of scoliosis. Kids backpacks, however, can cause back, shoulder, and neck pain when they’re too heavy and worn for the better part of eight hours a day.

Scoliosis affects 2-3 percent of the population, or an estimated 6 to 9 million people in the United States. Scoliosis is an abnormal lateral curvature of the spine. In other words, when a person has scoliosis, their spine is curved sideways. This condition is most often diagnosed in childhood or early adolescence, causing patients to make more than 600,000 visits to private physician offices.

There are several signs that may indicate the possibility of scoliosis:

In conclusion, a heavy backpack won’t cause scoliosis, but carrying it carelessly could lead to back pain or neck pain. Here are some spine-saving tips for backpack safety. Your child’s backpack should never exceed 10-15% of his or her body weight.

If you notice one or more of the following signs of scoliosis or experience back pain, you should call Orthopaedic Associates of Central Maryland to request an appointment with one of our orthopedic surgeons.